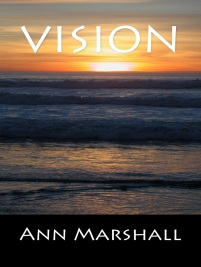 “Watch out for that moose in the road!” Tim yelled as John drove the two of them to the remote job site they were headed for at daybreak the next morning.

“Where?” John asked, even as he let off the gas pedal and scanned the horizon. “I don’t see any moose.”

Glancing at his friend sheepishly, the bewildered man said, “uh, sorry, I thought I saw a moose, but I guess it was just my mind playing tricks on me.”

Sighing with relief, John accelerated once again and relayed a bit of wisdom he’d gained over the years.

“You know, it’s really all just a matter of perspective. We think we see something. But, then, later on, we realize we were wrong.”

“Like my imaginary moose,” Tim now said good-naturedly, laughing at his mistake.

“Yeah,” John agreed with a smile.

“But, it can apply to other things, too … things like relationships,” he added wistfully.

Remembering the time John had been in love with someone and had thought they felt the same way – until he’d finally dared to express his desire to marry her and the woman had turned him down flat – Tim knew John had a valid point, and couldn’t help but agree.

“I guess you’re right,” Tim conceded, even as he began to think about his own relationship with his wife.

“Maybe I need to get a new perspective on things; maybe that will help me,” Tim told his friend hopefully, wondering if God was trying to enlighten him to something he hadn’t seen before; something that would help save his marriage.

“Maybe so,” John agreed with a gleam in his eye as he parked his truck in front of the house the construction crew would begin remodeling that day.

“That way, you won’t be seeing any more imaginary moose!”

“Rough night last night?” Mandy asked Annabel as the two began their workday as they always did with their usual cup of coffee and update on the current status of the projects and sales they were each working on.

“You could say that,” the interior designer revealed to her best friend (really, she had to admit, her only true friend).

“I’m sure it must’ve been hard facing that empty house,” the woman said compassionately.

“Yeah, that was rough … once I finally got inside.

“But, even before that, I found out Tim had spoken to my next door neighbors and asked them to keep an eye on me … to be sure I was okay, they said,” Annabel related.

“Well, that’s good … it shows that Tim still loves you enough to care about your well-being … even while he’s not there, right?

“Didn’t you tell me back along that you’d never lived alone before? That the two of you got married young so you just went from your parents house to that apartment with Tim’s friend before the two of you got a place of your own?”

“Well, see, Mandy said, Tim must’ve realized it could be hard for you to be living all alone – since you’ve never done it before – so, like I said, he must still love you because he’s looking out for you even in his absence.”

“I guess so,” Annabel had to agree, admitting she hadn’t seen it that way.

“It’s like when you design the interiors of the homes that our clients have neglected over the years.

“You look things over and you get a vision for how things could be. You see past the current condition and you come up with amazing designs that end up transforming the whole space!

“So, now that your marriage needs an overhaul, maybe a fresh vision is just the thing that will transform it into something beautiful,” Mandy reasoned optimistically.

“I suppose it couldn’t hurt,” Annabel replied, once again encouraged by her friend’s pep talk.

“I guess I’ll have to try to open up my mind so I can see things differently.”

“Not only that,” Mandy said, “but ask God to enlighten you.

“Ask the Holy Spirit to give you a vision … to enable you to see things from a new perspective … His perspective.

“That way, you’ll be open to His leading and guidance in whatever He knows needs to be done so that you and Tim can get back together and have the kind of marriage God desires you to have.”

“Okay, okay,” Annabel agreed with a smile, realizing her friend might be on to something significant.

“How did you get to be so smart, anyway?” the now hopeful woman teased.

“Years and years of practice,” Mandy responded with a huge grin, glad once again to have had the opportunity to help her friend.

Click on the following link to purchase from amazon.com